skip to main | skip to sidebar

The image you are about to see is ©1990...to me! Don't even think about ripping off my idea......I'll be so angry if you do!! Also, more importantly, the image is staggeringly amazing......it's staggerazing!! 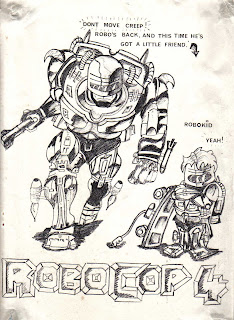 I drew that rockin' poster when I was about 10....and I was sober. It's really quite fascinating trying to put myself back in that kids place. The image makes me laugh now, but at the time....this was a great idea. I remember it was around the time Robocop 2 was coming out....I knew they had to be thinking about a Robocop 3, but surely they weren't thinking 10 steps ahead....like me!
Why movie execs never came knocking I'll never know. I gave Robocop extra shoulder spikes for the love of God! Not to mention the leg boosters and arm missiles he was desperately in need of, and to top it off, he appears to have a new backpack with attaching pipes, which, if I'm not mistaken, most likely contains the apple sauce baby food RC oh-so adores!
Now you've probably noticed Robocop isn't alone in this poster, deary me no! It wouldn't be a decent sequel without a cool new sidekick! Cue Robokid! Look at him....he has a skateboard! Does it get any cooler? Yes it does....the skateboard has remote activated rocket boosters! How ever will Robocop keep up with him? He's gonna have to keep that scallywag on a short leash if they're ever going to be the crime fighting duo they're destined to be.
Lets stop and have a wee think about Robokid. If we are to go on what the Robocop movies have taught us, it takes a brutal murder to even be considered for the Robotification privelage. So what's the kid's story? I like to believe he's Robocop's son who is out for revenge on a skateboard. Nobody kills his dad and gets away with it!! But, uh-oh, just as he gets a few decent leads, Foreman's Dad from That 70's Show pops up and blows him away while yelling "I'm not really dead dumb-ass!". So then, because of their immense respect for old Robocop, the policey sciencey people decide to fix his kid! But Robocop is worried and yells, "He loves his hair, please be careful", the scientist tells him "don't worry, we'll fit him with the latest in open-top helmet technology". Robocop smiles and shakes his hand "thanks creep".
Finally, we have the tag line. "Don't move creep" (I think he's taking to you) - Robo's back and this time he's got a little friend - Robokid.......Robokid is in utter agreement with what's just been said so, obviously, he says, "Yeah!".
As you can see, I was pretty down with Robocop at 10 years old, which is probably why I was one of the few who were allowed to call him Robo.
So yeah.....Robocop 4. Kids are weird. I love it.
Posted by Ryan C at 7:36 PM 1 comment:

I really didn't want my 2nd post to be about religion, but it looks like it's going to be. It's not a can of worms I really want to open. I don't want this blog to come across like I'm trying to be controversial or just trying to get a reaction, so if it seems like I am, I apologise. What I'm about to talk about is something that has constantly popped up in my day to day thinkerating.
Anyway. I don't believe in God. I just don't, not any incarnation. But I'm cool with it if you do. I'm open to anything, and if one day I'm presented with spectacular proof that I simply can't deny, I'll high 5 those who do already believe and say "hell, you were right sport, I should have listened" and they'll say "don't say hell". But as of right now, I'm secure and happy not believing in God.
This however isn't going to be an article about whether or not God is made up, no no, this is a question that me and my friends have often asked.
How come so many comedians don't believe in God?
It seems to be a fairly common occurrence that stand up comedian's quite often don't believe in or have big problems with a higher power. From the likes of Ricky Gervais, Bill Hicks and Robin Williams to George Carlin, Bill Maher and Jon Stewart. They all often make a habit of pointing out why it all seems like fiction to them.
This has lead me to look a little closer to home and I've pretty quickly discovered that those around me who I consider funny fellas don't believe either. What a coinkydink
After thinking about it a fair bit, this is how I've summed it up...
Once you start to laugh at something it quickly begins to unravel and a strange amount of truth begins to present itself. It's kinda like if you're watching a bad movie and you know it's bad but you don't want to admit it, but you make that first out loud mock and WHOOSH the flood gates open and it's open season. You start to see the movie in all it's bullshit glory and that movie is busted. So yeah, it seems the same sort of thing can happen with religion, you have a bit of a laugh about it "of course the snake could talk to Eve, it wasn't until 1785 when the snake talking ban was put in place that they stopped.......silly billy!" But once you've put one part under the funny microscope (they have those) you start to see the ridiculousness of it all, which raises questions that ultimately can't be answered and thus busts open the whole shibang.
I'm not saying that you need to be funny to see the truth, but it sure seems to be quick way of conjuring up some very important thoughts and questions. To borrow a line from comedian Lewis Black, "I like the concept of Faith, except I have these thoughts……and thoughts can really fuck up the faith thing." For me, that is so true.
Now laugh at these silly buggers...

I don't know how or why you've found it but...Welcome to my blog!

Firstly 'Rypinions' is a clever merging of my name, Ryan, and the word "opinions". So right off the bat you know you're in intelligent, caring and slightly chubby hands.

So yeah, I'm gonna spout off a bunch of crap about things you may, or may not, care to read about. I'm not claiming to be the brightest bulb in the....bulbery? But I have my opinions and I thought it might be a hoot to see how sharing them with a bunch of strangers works out. Plus I'll try and keep it all lighthearted and funny so those who disagree with me can sit back laugh and think "My my my.....that Ryan is a humorously incorrect scallywag, oh what harmless comedic fun". You know, the same way Republicans and Fox see Jon Stewart and the Daily Show.

Oh and I wont only be posting my opinions, GOD NO!! That would be mighty boring wouldn't it? I'll also post anything I think may be of interest to whoever you may be. Things like clips, stories and pictures. You name it, and as long as what you name is one of the 3 I just mentioned, I'll post it!

So, to get the party started. Here's something that has warmed my heart for many years. I don't think I can laugh hard enough at this. I wish it were longer!!!